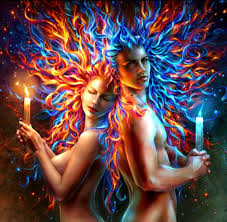 I had a dream visit last night with Bill, Will and Ted. I entered the dream in a long hallway with high arches. Everything looked to be made from moonstone and marble. There were quartz crystal sconces on both sides of the hall – no visible flame or light bulb, but they glowed anyways and lit the way. Bill came running out of a doorway – stopped – looked at me and flashed me his million dollar smile. What are you up to? I asked? Nothing at all – he replied.

But I knew he was full of it — something was up.

Bill commented – You’re going to love NYC! I’m sure I will – I replied – any idea when I’ll be there? He laughed – sooner than you think. He grabbed my hand and started to pull me down the hall. I’m like – where are we going? He said – any place but here.

Which of course made me think – why?

Then I knew why — Will came out of a door. Will looked down and us and shouted – Hey!

I gave Bill that “look” – like shame on you.

Then those two started yelling at one another – oh good lord the cuss words. Finally I said (and I remember this line crystal clear) — both of you shut the fuck up!

Startled they both looked at me — I kept yelling: what do I look like – a piece of property you two can barter over, decide who I will be with — talk to me as if I wasn’t here when I’m standing right here! That’s it — I pick Ted.

The look on their faces was simply priceless. You can’t do that — Bill said. And who in the hell made you team captain? I yelled back. I’m the oldest soul Bill replied – that’s why. Wrong – oh wrong — I said, Will is. You’re wrong – said Will. Am not – I said. Yes you are – we’re the oldest soul – Will said.

Roll of the eyes — whatever. I pick Ted. And when I roll over morning, noon or night and look into those scrumptious green eyes — I will not be thinking of either if you.

I woke up and smiled. Nice dream. Love it when these three show up!

Want to know more about telepathic, dream, or astral sex? Ready to add an orgasmic layer to your sex life no matter if you are in a relationship or flying solo? Check out my book Out of Body Ecstasy at Amazon today!
Previous Bill, Dreams, and Astral Travel Next Ted, Bad Choices, And Bill's Here Too!

0 Comments for “Bill And Will With A Sprinkle Of Ted!”